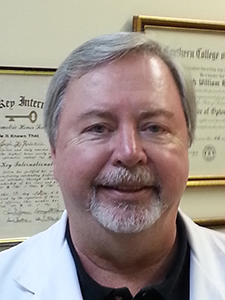 He is the past president of the Tennessee Association of Optometric Physicians and has been honored as Tennessee’s Optometrist of the year.  During his years in practice, he has been a clinical investigator for new soft contact lenses, participated in several clinical studies for new drugs for the eye and served as an Adjunct Professor at Southern College of Optometry.

Dr. Remke has served his community as past president of the Lawrence County Chamber of Commerce and is past chairman of the City of Lawrenceburg Board of Public Utilities.  As an advocate for education, he has served on the boards of the Columbia State Community College Foundation, the Austin Peay State University Foundation, the 21st Century Council and is Chairman of the Sacred Heart School Endowment.

During his free time, Dr. Remke and his family enjoy sailing and automobiles and he is a national high-performance driving instructor for the Porsche Club of America.